In this 5th installment, I am going to share a little history about myself, my life….my life with dogs. I have been a dog lover all of my life, I’ve had a huge connection to them. I had a dog straight … END_OF_DOCUMENT_TOKEN_TO_BE_REPLACED

This is an Amazing Edition of Video’s that I have taken in my home in Verona, WI USA. I have 14 videos with ORBS. Some of the Energy that Michael is creating is Stunning. I’ve never seen anything like this … END_OF_DOCUMENT_TOKEN_TO_BE_REPLACED

Since My Michael passed, I have had many unusual occurrences happening…that he is showing he’s around me. What I am going to share with you actually happened….there were 7 people who witnessed it, but it really, made a heartfelt connection for two of us. An Absolutely Amazing experience!!! In a later edition I will share more of what a particular Medium told me…but during my Reading in October she told me that my Michael was telling  her he sent me a man. She couldn’t understand what he was talking about since he had recently passed…why would he send me a man???

This is the story of the Man Michael sent me….I had never met him before…never heard my Michael talk about him….

I had one of the most Amazing experience in my life on Sunday Sept 4th, 2016. My Michael, God, the Angels were all conspiring. What I have to share really shows that there is so little we know about Mysteries and Magic of the Universe.

To add a little background for those who haven’t followed my blog…My Beloved Boyfriend, Michael Lidbury, passed unexpectedly on Aug 22, 2016. I live near Madison, WI and my sister, Karen Hernandez, flew in from AZ and stayed with me for 2 weeks.

One of the things my sister requested while she was in town was to visit Milwaukee, she used to live there. She wanted to see an old friend, Lisa, and also see her old stomping grounds. We decided to go Sunday, Labor Day Weekend, and meet Lisa at her shop. I was driving and was doing my best to keep my emotions together, even though that was when Harley Davidson has their BIG Weekend Party and we had to drive right by the HD Museum. Mike and I had gone to the party in the past. Let’s just say…Milwaukee was overflowing with bikes!

As I was waiting for my sister and Lisa to leave the shop, I sat on the front step…looked down and found a dime. Yes…this is one of the ways our loved one’s let us know we are around. Remember the saying…Pennies from Heaven?

The main place I wanted to go to was Sobelman’s Pub. A legendary place in Milwaukee known for their Bloody Mary’s. Michael and I would go there every year and have one. So, I wanted to go and honor him by having Bloodies and Cheese Curds! The place was packed and we had to wait a little to get a table…of course…lots of Biker’s. We didn’t wait too long. We ended up getting a table that Mike and I had sat at before…no surprise there. We were having a nice time, when a friend sent me an old photo of Mike, it git me emotional, so I went to wait in the car for the two of them to finish. 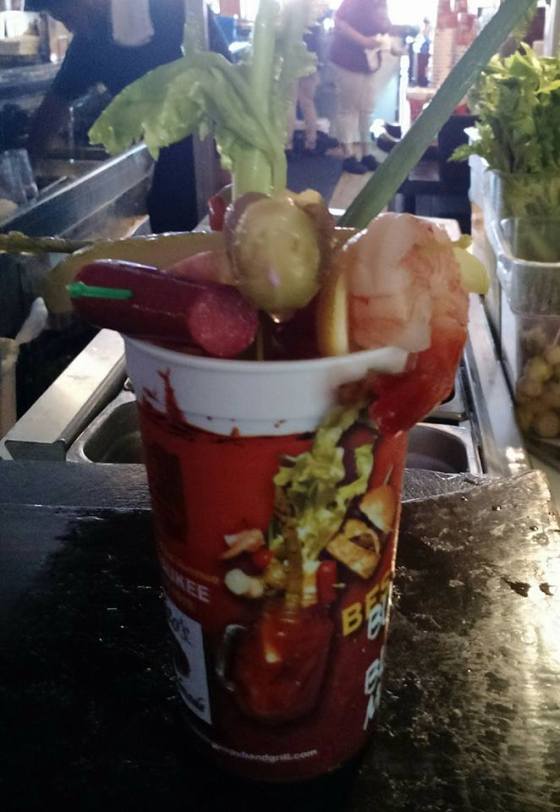 When they got to the car, I had pulled myself together, but was energetically drained. Karen wanted to go downtown since she used to live there…but I couldn’t…It was just too much for me. I felt bad, but just knew that I couldn’t drive there.

Lisa suggested Barnacle Buds, a bar and grill, along the river, not too far from where we were. It was a beautiful day to sit outside, watch the boats and there was even a very eclectic musician that we all enjoyed. We were there a short time when her Lisa needed to leave.

Lisa asked me to take a picture of her and Karen with the river in the background. As I was taking the picture, two men came up to me. One suggested that I get in the picture and he would take our photo. After he took our picture, Lisa asked the men their names. The one that took our photo said his name was Mike…and then proceeded to introduce the other man as Mike.

I immediately started to get emotional, told the Mike who took our picture that the name Mike is a really hard name for me right now. I actually started to touch his chest and he thought I was hitting on him. I then explained how I had just lost my Mike, that he recently passed away. His first reaction was… where did he live…where was he from… I said Whitewater…The Mike that took our picture said he was also from Whitewater!!!

Then he proceeded to ask me his name… I said Mike Lidbury… otherwise known as Animal. He was completely caught off guard…He knew him by the name Animal. He even had stories to tell about himself, how he and my Mike (Animal) had met.. going back to 1984….I was completely blown away…lost it on this stranger who knew my Mike…his wife was wondering why this strange lady was hugging and crying on her man…Here we are in Milwaukee…at a place I had never been… didn’t plan to go to, but Lisa suggested it and Spirit makes this Beautiful connection. 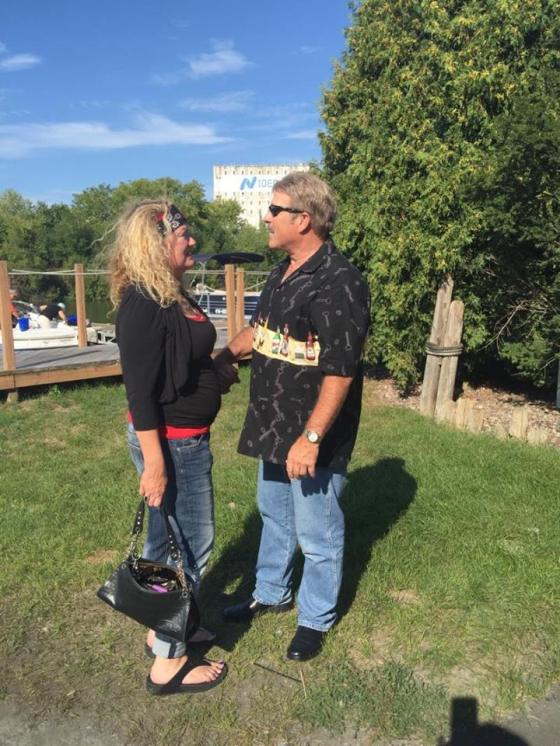 Mike initially told me he met my Mike (Animal) as a young police officer in Whitewater. Whitewater is a college town. Mike the police officer was in his uniform, my Mike was with a bunch of biker’s. They both had stereotypical thoughts about each other. By the end of their first meeting Mike the police office was actually sitting on my Mike’s bike…telling him he will make sure that all the bike’s are protected from the college students. Both Mike’s  would have been in their mid twenties during this time.

This is what Mike wrote to me later… “Animal came to this young cops aid one night while I had my hands full with fighting college students. His appearance and demeanor back then coupled with his desire to help a cop in need was truly appreciated at the time and stayed with me throughout my career. The story of our initial meeting was humorous but taught me that no matter the appearance, you can still show respect to your fellow man.” Mike Ciardo a Whitewater, WI Police Officer.

I was truly amazed. We both were. Even the other Mike that was with him said…”Yeah, I know this story…you were just talking about it”. There were seven of us that witnessed this that day. Truly incredible. I had no plans to  go to that bar that day, no plans to take a photo, I wasn’t even the one to ask him his name…

But My Michael sent me a Man…to show me what he is capable of doing…how God works, how the veil is so thin between us. We really do have access to our beloveds that have crossed over.

As I was finishing writing a short version of this to post on Facebook…’Somewhere Over the Rainbow’…Israel’s version… came on my Pandora. This is a song from the movie “Fifty First Dates’ with Adam Sandler and Drew Barrymore. Mike loved this movie…a romantic, sentimental man at heart. I wanted it to play at his funeral…but sadly no music, not one song was played. Anyway, as I was looking over my notes to start to write this blog today, the very last sentence mentions the song…Well guess what….I had Pandora on and ‘Somewhere Over the Rainbow’ came on again.

I am awestruck by the Magic of the Universe. How much My Michael is able to come through. Many Mediums have told me he has powers beyond the ordinary person passing…that this meeting of Mike the Whitewater Police Officer had to take a special soul to work that magical meeting.

I miss My Michael every minute of every day. But I am so very thankful to have these special signs from him.

As I was writing this…I looked at the clock. 12:34 and now…1:11! These are all signs from the other side…Beyond the Veil. In my posts I am giving you a lot of ways that Michael has come through. Please know that your loved one’s are nearby too. They want you to talk to them, they want to help you with your life. You just have to open your eyes…pay attention and give Thanks to the God, the Universe, the Divine…whatever name you want to call it. We live in a very Magical Universe. Watch…listen…pay attention to the signs!

Here are the previous posts:

Beyond the Veil, with My Michael: Part 1

Beyond the Veil, with My Michael: Part 2

Beyond the Veil, with My Michael: Part 3

Much love and Many Blessings to You and Your Family…

As you can imagine, it was extremely hard for me the first week and beyond after Michael’s passing. I was in shock, mostly just going through the motions.  I was completely devastated, shattered….But My Michael,being My Michael….he started to come to me through other … END_OF_DOCUMENT_TOKEN_TO_BE_REPLACED

Hindsight is always 20/20. Looking back, Michael definitely knew something was going on with him. He said and did things that I know at least on a subconscious level he realized something was up. Now that I know…would I have … END_OF_DOCUMENT_TOKEN_TO_BE_REPLACED

Many of you know that My Michael passed unexpectedly Aug 22, 2016. This is the beginning of a blog about him, about us…about how he has been contacting me Beyond the Veil….and God only knows where it will take us… My … END_OF_DOCUMENT_TOKEN_TO_BE_REPLACED

I had been searching for my Soul Mate for years. I had been married young, at 19, my son at 25, and divorced by 32. I stayed single for years. Meeting lots of men, having a lot of first … END_OF_DOCUMENT_TOKEN_TO_BE_REPLACED

Here is a great way to really pamper, take care of yourself…spend some much needed alone time nurturing yourself! At least once a week….clear your aura, your energy field of all the energetic sh** you pick up. Plus raise your … END_OF_DOCUMENT_TOKEN_TO_BE_REPLACED

Many people have asked me about my own Twin Flame story…wanting to know how things happened for me. One of the main things I can say is I asked for help from the other side, the Divine, Source, God, the … END_OF_DOCUMENT_TOKEN_TO_BE_REPLACED

I just received this Testimonial on my Violet Flame Meditation to Attract Your Twin Flame/Soul Mate…. “Just listened….wonderful! Made me laugh out loud a few times….and now I am pleasantly tingling!”…Faith All the ‘work’ that I do has to do … END_OF_DOCUMENT_TOKEN_TO_BE_REPLACED

Welcome to Soul Spa, a space for women to evolve as goddesses while being supported in true sisterhood.

Michael: Beyond the Veil

Welcome to Soul Spa, a space for women to evolve as goddesses while being supported in true sisterhood.

Michael: Beyond the Veil

The Intuitive Realtor
Ignite Your Power to Attract